We shot a new Dyna-Ski video the other day.  My water ski friends Micki and Jon brought their 20' Open Bow with an Evinrude 200 HO over for the day along with their kids and a few extras.  My 16 year old son was also a big part of the whole production.  I had made a list of the shots I wanted for the new video.  My day job is in the television business.  I edited video for about 30 years.  Now I work on live sporting events to pay the bills. But that is another long story. Yes I am "old".  My then 15 year old son did the 17.6 video that has been online for about a year with very little input from dad. 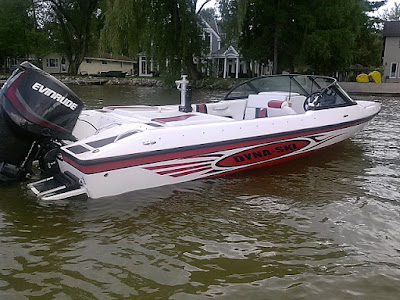 The weather man gave us a nice warm day but it was fairly windy so it is a real world look at how Dyna-Ski boats perform and are used by owners, their kids, friends, my neighbor, my son and me.  I learned first hand what it is like to water ski with a bunch of kids that also like to ride in the boat.  It was somewhat of a real eye opener and a great experience.  I learned a lot.  The three color Dyna-Ski is a 2012 model they purchased new so they are on their fifth summer with it.  It sits on a boat lift at Jon's mother's house.  Their boat is cleaner than they come from the factory!  Jon said it was a little dirty.  I laughed, my boat is filthy then!  Maybe we need to hire Jon and the kids to clean our boats?  It has snap on covers and sits covered on a boat lift with a canopy just like my boat does.  The trailer sits in the garage. Jon is an engineer and Micki owns a graphics company.  The Dyna-Ski 20' Open Bow has a three color interior.  It has a 200 HO with ICON digital shift and throttle. It is very smooth. The boat has a radio which Jon installed.  This 20' Open Bow has the sun deck with huge storage space.  I asked mother Micki various questions about their typical use of the boat. 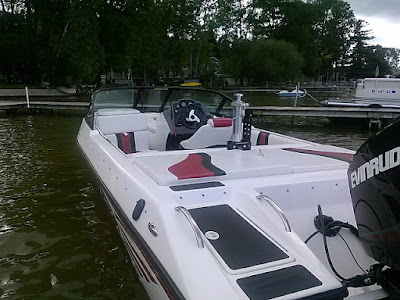 Micki assured that they use the storage space and said it is perfect size wise.  I often thought it was to large.  She said "no"!  They keep the boat on a 120 acre lake and cannot ski without going out a ways from the dock.  We ski right off the end of our dock.  So they take skis in and out a lot.  I asked about the interior seating and was told it is "great".  The kids love to ride in the front and driver Jon ran it numerous time across the large fairly rough lake I live on wide open which is into the low 50's on the GPS speedometer with up to three kids in the bow seats. The prop is a 17" four blade prop.  Their oldest (girl) is 12 or 14?  Lake Noquebay (2410 acres) was fairly rough so we went across the lake to ski sometimes and shoot video where it was calmer but had more boat traffic.  The drone video was all shot near my house where it was much rougher than we usually ski on.  Jon said the water was a typical day skiing on Kelly Lake but with less boat traffic.  I guess that I am spoiled?

The 20' Open Bow video will be edited and appear on Utube as soon as it is near perfect.

It is obvious that Micki, Jon and their kids love their 20' Open Bow Dyna-Ski. Here are some pictures of how his dash is set up with digital gauges and a radio.  Jon like me prefers an analog gas gauge which is the one furthest to the right. The radio is a "cheap" one he bought on line. It worked well with no visible antenna. 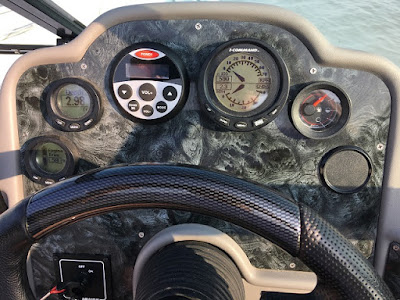 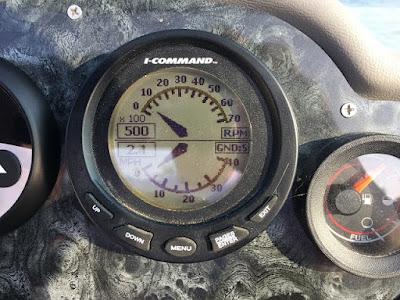 I need to learn how to program the gauges to get this display.
Jon has removed the other 3" gauge and installed the radio in its place. 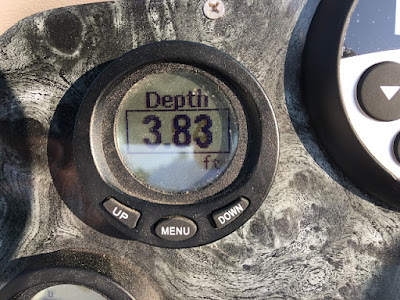 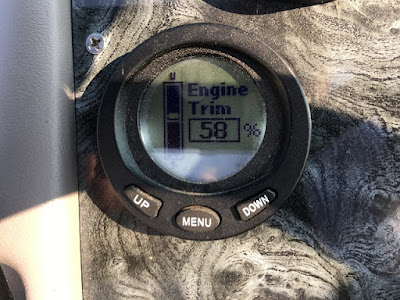 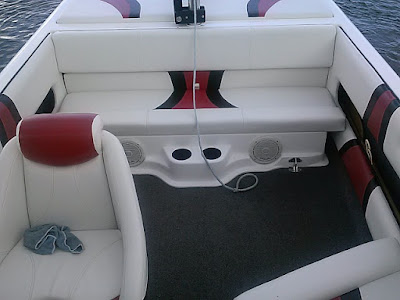 The speakers which were installed at the boat shop
As I said the boat is super clean!

Jon will be happy to give you a demo
if you come to his mother's place in Wisconsin and fit into their busy schedule.
Just email me at info@dyna-ski.com and I'll put you in touch.
Posted by Dyna Ski Pete at 4:37 AM