I get some feedback from customers from time to time although most of the time I don't hear anything which I guess is good perhaps?  I decided to share some of the feedback I have gotten.

The first feedback is from the new owner of a Dyna-Ski 20' Closed Bow with twin 225 Evinrude engines with standard controls and power assist hydraulic steering.  He also has an older single motored 18' Hydrodyne that he painstaking restored several years ago.

By the way he is trying to get me to send him free replacement decals for the ones the ski team took off. What do you think should I send him some?


We did look at the Yamaha controls but our main driver, and I thought that digital was the way to go and the two motor controls vs three was worth investing in.  Slaving the center engine is a clever way of addressing 3 motors.
With regard to independently being able to control three motors that is probably a personal choice rather than a necessity.  Not having owned one we will adapt and I have no doubt in the end it will be better than with 3 separate controls.


I think every model year most manufacturers are striving to improve fuel economy so the newer motors are better than the older motors no matter which brand you prefer.

Posted by Dyna Ski Pete at 6:42 AM No comments:

Dyna-Ski 20' Closed Bow boats usually are powered by two or three outboard engines.  Ski teams mainly purchase the 20' Closed Bow models for towing skiers in their shows.  In the past couple of years we have set up a couple 20' Closed Bows with only one engine for ski teams.  The Crivitz Ski Cats ordered a new 20' Closed Bow with a single Evinrude 250 HO and I-Con (digital) controls to replace one of their old inboards.  This new Ski Cats boat has a three color hull (red,white & red) to match their older new style Dyna-Ski twin. 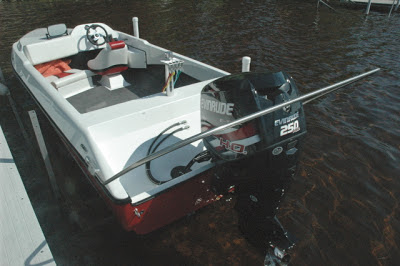 I got the chance to drive this rare Dyna-Ski boat for a couple hours the other day.  I expected it to be pretty good but frankly I was surprised by how powerful (4 blade 15 pitch prop) and smooth the combination is. When the throttle is punched from a standing start the rear facing rider has a hard time staying in their seat! The boats bow stays down and there were no sand bags under the bow.  The amount of power available requires a fine touch for pulling single skiers smoothly off the dock.  The I-Con control makes this easy. 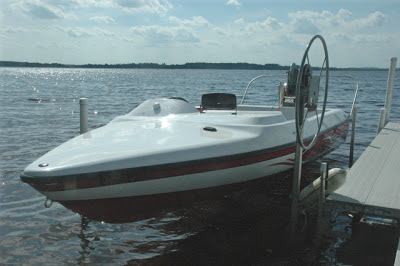 The Dyna-Ski required no motor trimming (up) for speeds from 0 to 40+ mph. There was little if any bow steer at 40 mph on the GPS Speedometer.  A slight trim up at 40 mph did result in a slightly higher speed though.  Not having to trim at all will make it easy for an experienced inboard driver to move to an outboard powered Dyna-Ski I suspect. 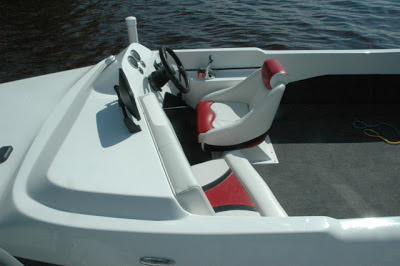 The Dyna-Ski has a very nice wake for a barefoot pyramid with the motor trimmed all the way down or slightly trimmed up.  The 40+ gallon gas tank was left in the standard front mounted position as the ski team wanted the flexibility to turn this boat into a triple in the future.  In the other single motored Dyna-Ski 20' Closed Bows we put a smaller gas tank in the rear with no tank under the bow.  The gas tank was full when I was driving the boat around. 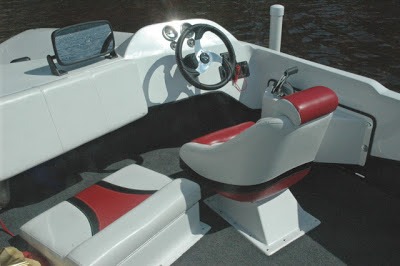 The Evinrude I-Con controls are so smooth. It is easy to set and hold any speed from zero to wide open with the digital system. The single binnacle control has adjustments for tension of the speed control portion and also for tension going into/out of gear. Very sweet indeed!  Top speed observed was around 48 MPH on the GPS with the 15 pitch prop.  All the I-Con system needs is GPS speed based cruise control or a "Perfect Pass" type of speed control software to make the digital control system perfect although with 250+ horsepower and a four blade 15 pitch prop the speed is rock steady for most skiers already. 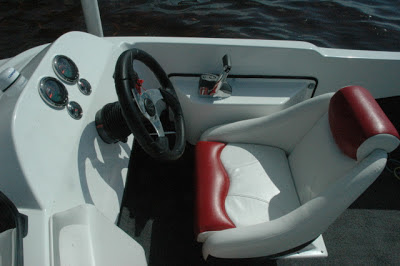 The Crivitz Ski Cats wanted to be able to change this boat into a triple some day so setting it up as a single means no transom holes will need to be filled if the boat is indeed made into a triple as the center engine is already in the proper mounting position.  The rope guard is mounted in the standard position used for a twin or triple.  The difference between the twin and triple is the shape of the rope guards themselves not the mounting location. 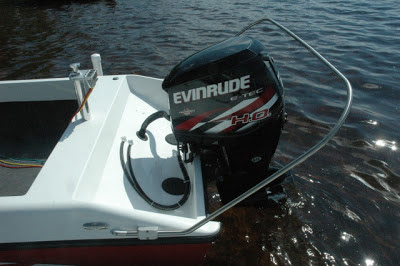 The Dyna-Ski 20' Closed Bow has an optional windshield and full interior. A rear mounted swim platform or two could be added although getting in the back of the boat with the large rope guard would not be easy perhaps?
Posted by Dyna Ski Pete at 5:49 AM No comments: