When you are pulling these many people there is a certain amount of luck involved. The luck portion is mainly no falls and no knots. 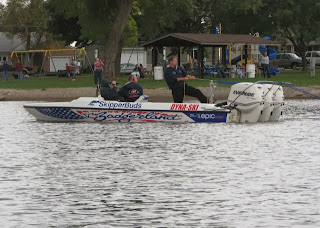 World Record Tow Boat
This above picture was taken at a previous attempt at the worlds record in Beaver Dam, WI.


There are a lot of photos/videos on the page Badgerland built for it:
https://www.facebook.com/EvinrudeWorldRecordHumanPyramid

The goal was 70 or 72 which they got off the dock a couple times but then they had falls and/or rope problems I was told.  I was not there. Seems they are going to take another shot at it again in 2014.